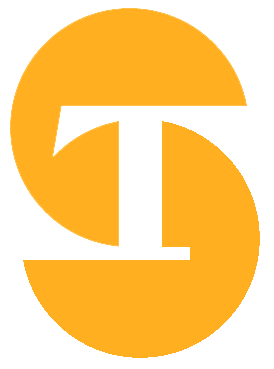 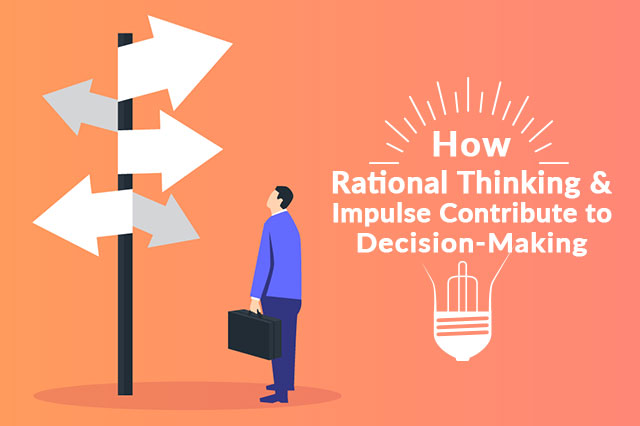 It is generally said that decision making is one of the frequent tasks that one has to do before participating in sequential life’s events. Let’s say you need to make a hard choice, one that turns out the situation completely or has adverse effects. What will you do? You can approach decisions neither in exasperation nor in blithesome. Sometimes in the midst of decision making, we need to form coordination to understand the complete situation. But how can we choose one option among two that is equally appealing? Decision making is usually an amalgamation of rational thinking and impulsive instincts. Certain factors work upon this ideology that guides us every year in the course of action. One of the most prominent is rational thinking. This is nothing but a multi-step process that serves insights, favors, objective and logic while taking a decision. This blog will discuss how rational thinking and impulsive behavior contribute to the decision process.

For several years, research in judgment and behavioral has revealed a lot more about rational thinking styles. For instance, how anyone incorporates ideas convincingly maximizes the rationality of the decision. The simple act of explaining why some people do not respond in the expected rate of rewards or punishment usually based on the behavioral. This implies that internals has a belief that they can control events, while externals do not believe they have control over events because there are factors outside themselves that are of importance to the outcome. Hence locus of impulse and rational thinking styles determines a lot of futuristic decision making. 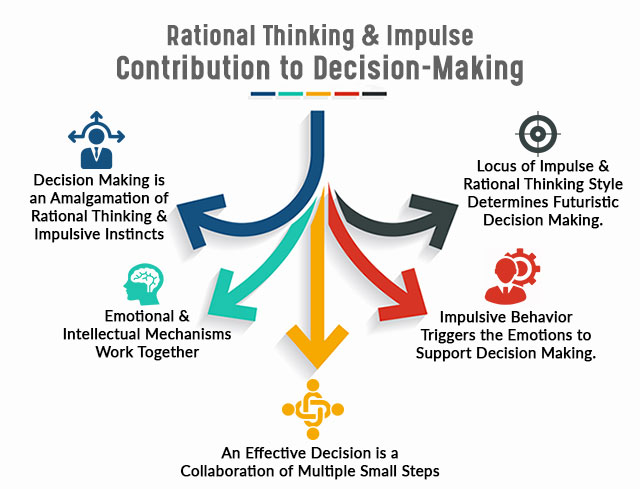 Much of our thinking is based on the course of action. Emotional and intellectual mechanisms work together and support each other. But according to research, better decision making can happen when one scrutinizes the situation in multi-steps. In fact, most of the decision-maker believes indiscretion the conditional. Thus how decision becomes effective depends a lot on the collaboration of multiple small steps. Surprisingly, happiness is not much better to take decisions. On the other hand, anguish often believes to forward vulnerable decisions. So where should approach? One would know this when he/she try to follow a systematic approach to taking an optimistic decision. Indeed there must be logic in a decision or must have logic in decisions. Colloquially, lets the decisions dictate the stepping of progressive decisions.

What does it mean to be rational?

When we asked to make decisions, we simply apply several frequently occurring motifs in the direction of decision making. Therefore one’s impulsive behavior and rational thinking contribute to effective decisions to a great extent. Perhaps the most common rationality which is being observed are discussed below-

The right approach of decision making often takes a long spare to cover the whole perspective at a single glance. This is how you can take decisions matters a lot. For more information about the forms of decision making and its aspects, one may go to online assignment writer assistance.

Emotion viewed as the negative element that hinders the rational decision process. Hence how could impulsive behavior get untouched with its productive results? More recently, some researchers have highlighted the importance of environmental, social, and emotional influences on decision-making. The significant roles played by the anguish character and joy that can inhibit the right decision process. Through this, one would suffer later and reflects the feelings that might steer them wrong. We evolved since hunter-gatherer times, so if someone fetches some personal belongings, you won’t let rational thinking involvement to make decisions. Instead, you strike back quickly. Here is what impulsive behavior triggers the emotions to support decision making.

“Anger is the primary component meant for justice” But sometimes, it works the opposite. Many political inwards use anger to turn out the voters; this may release thousands of votes. Nevertheless not all the issues work upon infuriation.

People frequently apply alternatives, rather combining the framework of social and economic behavior. Thus these decisions are strongly based on the impulsion as well as recommendations. Those decisions usually have been taken in the influence of social forms or by advertisement. For instance, if someone wants to become slim, at the same time fresh slim tea get introduces, then the probability of purchasing decisions is triggered by emotional approaches in particular. On behalf of that, rational decision making become unrealistic and oversimplified assumption-

How to use the right methodologies for making effective decisions usually calls for some assistance. If your academic areas carry some issues then taking online assignment help assistance from Source Tutors will become the right choice for you.

Decision making is an amalgamation of both rational thinking and impulsive instincts. Thus emotional and intellectual both the mechanism are working together to foster better results. However, an effective decision is a collaboration of multiple steps. But not all decisions are based on the discrete units of rational approaches. A few decision processes have been taken place in the influence of emotional triggers. Like in the market most of the purchase decisions are based on the advertising rather discrete unites. Therefore using a rational approach is not always useful when some influence under emotional supports. This may forward the other side of the decision process to derive the better version of decisions.

If there is someone who is confused while composing assignments or won’t be able to make the right decisions in the direction of research, he/she can go for assistance from the assignment help services available at SourceTutors.